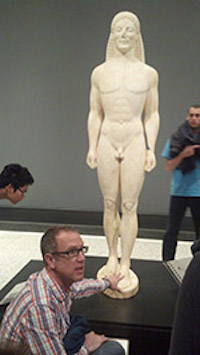 Brice Erickson, Professor of Classics, earned his Ph.D. from the University of Texas in 2000 and taught at Dartmouth and DePauw before arriving at Santa Barbara in 2003. He is an archaeologist of ancient Greece specializing in Archaic and Classical (ca. 600-400 B.C.E.) ceramic sequences. Other interests include ancient Greek history, religion, and identity. His first book, a study of post-Minoan Cretan archaeology and history, was published by the American School of Classical Studies Press (Hesperia Supplement) in 2010. Brice’s next project took him to central Greece to publish the Geometric through Hellenistic (ca. 970–175 B.C.E.) remains from Lerna, a village in the Argolid.  The results of this study appeared as a volume in the Lerna site publication series in 2018.  His current project is a book on the Athenian Empire. It will have a more archaeological and economic focus than previous accounts that have been dominated by the ancient texts and an almost exclusively Athenian perspective.  His work on Crete continues, with an article in the American Journal of Archaeology entitled “Cretan Pottery in the Levant in the Fifth and Fourth Centuries B.C.E” (2017) and more recently a piece entitled “Conceptualizing Southeastern Crete in the Archaic through Hellenistic Periods” (2020).